Are the costs of deep-ocean oil too high? 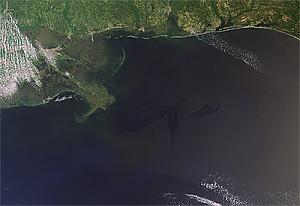 With the US Gulf Coast facing imminent disaster as the oil from a sunken drilling rig moves toward shore, some officials say it’s time to say a definite no to “drill, baby, drill.”

It’s been just one month since President Barack Obama announced plans to open vast new stretches of the nation’s coastline to oil and gas drilling. His opponents on the right dismissed the move as “feeble” and environmentalists questioned the wisdom of the decision, but subsequent news that the US military was preparing for “a severe energy crunch” as early as 2012 suggested a possible motivation for the new drilling policy: looming peak oil.

Here we are, though, just weeks later facing a looming crisis of a different kind: a costly environmental catastrophe along some of the US’s most vulnerable — and economically important — coastal areas. Since the Deepwater Horizon drilling rig exploded on April 20 and later sank, as much as 5,000 barrels of oil a day have been leaking into the Gulf. The first edges of that slick are expected to reach Louisiana’s coast today.

That’s prompted some to now ask: Have we finally reached the limits of our oil-drilling ventures? Is it time to stop going ever farther out, ever deeper, no matter the potentially dramatic impacts? And, if so, what are the consequences?

Democratic Senator Bill Nelson of Florida has already said he plans to file legislation to put a stop to Obama’s drilling expansion plans, and the newspaper USA Today raised the question as well.

Given the apparent extent of the ongoing disaster in the Gulf of Mexico, maybe that’s the right move. Could it be time for the world’s oil-hungry nations to emulate Ecuador’s strategy to “leave the oil in the soil?” Ecuador’s decision is being supported by more than $3 billion in UN funding; perhaps the UN should create similar incentives for the rest of the world as well?

Depending on what happens in the Gulf in days and weeks to come, we might hear fresh answers to such questions soon.