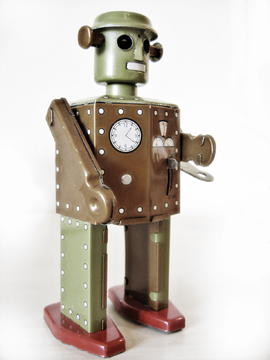 Robots have often been called on to save the world, as anyone who has watched Terminator 2 or Transformers will tell you.

Now, they’re being deployed to watch the world’s oceans. From Associated Content:

“Dubbed the Argo project, the internationally supported research program is aimed at helping scientists worldwide better monitor changing ocean temperatures and understand the oceans’ influence on climate and fisheries. Data on undersea conditions are gathered by a network of five-foot-tall robotic profilers now operating simultaneously in all the world’s oceans. The last of the 3,000 Argo units were deployed this month.”

An admirable effort. Although perhaps robot sentinels patrolling the nation’s canals and fishing out the assorted placcy bags and shopping trolleys might not be a bad idea either.