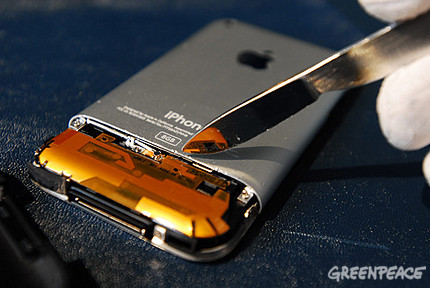 Greenpeace has slammed the slick computer-and-phone-maker, Apple, for putting “hazardous chemicals” in its iPhones.

The organisation adds most handset manufacturers stopped using the chemicals some time ago.

The remarks come soon after Apple committed to be more environmentally friendly.

Greenbang uses a Mac and likes them very much. But if these claims are true, Apple really has some explaining to do. Yet seeing as it’s press office never says anything unless a product is being released, you might have to sing for that one…

This photo looks under the iPhone’s back cover is the antenna. Of all the components tested, this piece of flexible circuit board was found to contain the highest levels of bromine…

Unfortunately our tests on the iPhone have revealed it contains hazardous chemicals, including nasty stuff that other phone makers have already stopped using. Get the full details here including a video and high quality pictures of the iPhone dismantling for testing.

If Steve really wants to reinvent the phone, he needs to design out all hazardous substances from the iPhone. It should be at least as green as the offerings from Sony Ericsson, Nokia and Motorola.

That would be the first sign that his promises of a greener Apple will bear any fruit. Right now he appears to have any green product news ‘on hold’.