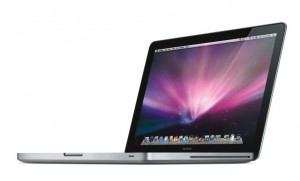 Twice a year, a clergy of geeks flock to the church of Apple. Even the tech press are immune to the power of Steve Jobs – bowing down to the latest Jonathan Ive design.

Those white sleek lines, the user friendliness, the fact that brandishing a bit of Apple kit in public just makes you that little bit cooler than everyone else. Greenbang understands you, Apple fanboys and girls.

Last year, that Apple status symbol carried a high environmental cost. Greenpeace ranked Apple last for environmental friendliness amongst a comparison of the major electronics manufacturers. But it seems Apple has taken those criticisms on board and has upped its environmental ante with its new range of MacBook laptops.

“Apple has invented a whole new way of building notebooks from a single block of aluminium. And, just as important, they are the industry’s greenest notebooks.”

Apple is clearly trying to change its environmental reputation with details of its green credentials now slapped all over its website.

The new MacBook uses arsenic-free glass, is PVC-free, brominated flame retardant-free, mercury-free, is made of highly recyclable aluminium and glass enclosures and has 41 per cent smaller packaging.

Apple claims that control over the entire production process has allowed it to create smarter products that use less electricity, with the new MacBook using one quarter of the power of a single light bulb.

The laptop has also earned an Electronic Product Environmental Assessment (EPEAT) ‘Gold’ rating. The EPEAT tool evaluates the environmental impact based on how recyclable it is, how much energy it uses and how it’s designed. The new MacBooks also received Energy Star certification.

You can find out more from Apple here.

Beautiful as the new MacBooks look (though we’re not sure about that shiny glass screen), Greenbang has to point out that there isn’t really any such thing as a ‘green’ laptop. Yes, the new MacBooks might be more energy efficient and less environmentally damaging than most other new laptops but there will always be some sort of footprint for laptops, PCs, gadgets and other IT kit. And that’s due to our insatiable demand for the latest shiny, shiny new thing…