Al Gore: Information tech is key to a sustainable future 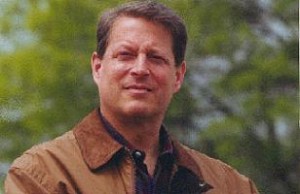 Information technology has not only given us an unprecedented ability to identify complex problems like climate change before the worst effects are felt, but promises a way forward for a more sustainable future, former US Vice President Al Gore said at a business and technology conference today.

Gore, who shared the 2007 Nobel Peace Prize with the Intergovernmental Panel on Climate Change, delivered his address at SAP’s SAPPHIRE® NOW conference being held this week in Frankfurt, Germany, and Orlando, Florida. The international customer conference is exploring a wide range of technology-related sustainability issues, from cloud computing to crowdsourcing.

“Our relationship to the Earth has been radically transformed by three factors,” Gore said at the beginning of  his keynote. Two of those factors are the explosion of the human population over the past 150 years and advances in science and technology, which have “brought many blessings but also unintended side effects” — most notably, a global economy powered by carbon-based energy.

The third factor, which Gore called the most subtle but possibly also the most influential, is how we think about our interactions with the world. We’ve reached a point, he said, where — to assure a sustainable future — we need to stop reacting to challenges with the “fight or flight” responses of our ancestors and solve problems using rational thinking and consensus building.

The world’s businesses can help with that challenge by realising that sustainability is not only an increasing concern among customers, but also good economic sense, Gore continued.

“There are multiple reasons why business leaders who focus on sustainability are better off in many different respects,” he said. For one, he noted, pollution — in particular, greenhouse gas pollution — is waste. The more businesses can reduce waste, the better off their bottom lines, he said.

“Carbon dioxide is a marker of business inefficiency,” he said.

With an array of advanced information technologies now at their disposal, businesses can more easily identify inefficiencies and reduce waste, Gore said.

“Computers have given us an incredible ability to break down problems,” he said. Used to its full potential, he continued, information technology can help us steer toward a sustainable future driven by renewable energy, smart grids and millions of new, green jobs.

“We have everything we need to succeed, with the possible exception of political will,” Gore concluded. “But I believe political will is a renewable resource.”