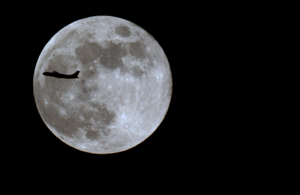 That flight delays suck is not exactly news. The extent to which they suck has now been worked out in all its numerical glory, however. According to a US Joint Economic Committee report called Your flight has been delayed again, all that sitting around on the runway, reading the in-flight magazine and wishing the idiot next to you would share the armrest is responsible for eye-watering amounts of jet fuel being burnt.

According to the report, “burning fuel during flight delays released an additional 7.1 million metric tons of climate-disrupting carbon dioxide into the atmosphere” with airlines consuming an additional 740 million gallons of jet fuel in 2007 as a result of delays.

And there’s more. Says the report:

The JEC finds that delay-related jet fuel burn emitted at least 7.1 and up to13.4 million metric tons of carbon dioxide (MMTC), or about 5 to 9 percent of all carbon emissions from domestic commercial aircraft in 2006.

All of this wasted fuel comes at a cost of $1.6 billion. Ouch.

So how does the airline industry fix all this? The JEC says most of these delays come from flights arriving late, and as a result, delaying subsequent take-offs. It recommends overhauling the air traffic control system and it does it like this:

Seven long years of laissez-faire government policies have left the U.S. aviation system in need of significant improvements and reform; exacerbating the number of flights delayed and the total cost to the U.S. economy. Inaction by the administration has only worsened the problem. Failure to fund equipment upgrades, particularly new air traffic control systems, such as Next Gen, which would convert the nation’s radar-based aviation tracking system to a satellite based one, has added to the volume of flight delays. Additionally, the administration has failed to act upon the recommendations of the New York Aviation Rulemaking Committee, which among other things, called for an opening of 15-20 mile band of air space directly off the coast of the eastern seaboard that is currently used for military training purposes. Opening up a portion of this underutilized space would allow commercial airlines to avoid congested areas over New York City, Washington, Atlanta and Florida or bypass bad weather when it arises on the east coast, thus significantly reducing delays.

Certainly, some air traffic delay is unavoidable. Flights can and should be delayed if safety issues arise as a result of severe weather or mechanical problems. Additionally, some level of air traffic congestion is desirable, particularly at “hub airports,” to allow airlines to cluster arrival and departure times to offer passengers the most efficient connections. However the staggering levels of delays experienced in 2007 and the significant costs associated with these delays are clearly troublesome and suggest substantial room for cost effective improvements.

As the number of traveling passengers and air traffic congestion is expected to continue to increase, steps must be taken to alleviate pressures on the U.S. air traffic system. Government inaction over the last eight years has left the U.S. aviation system in need of reform. Without such reform, the total costs to the U.S. economy of air traffic delay – including costs to the airline industry, the flying public, the environment, and travel dependent businesses – are sure to increase.

You can read the whole thing here.