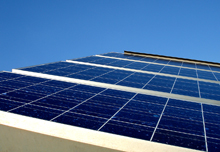 AES: three little words worth a wholes hedload of dollars. Well, Greenbang says shedloads, but on reflection, I guess it depends on the size of the shed in question. Can sheds fit $1 billion in it? Has anyone ever tried? Greenbang would like to find out.

To inject some sense into this shedbased ramble: AES Solar is a new, $1 billion venture set up by power company AES Corporation and private equity firm Riverstone Holdings which will “develop a global platform of utility-scale solar photovoltaic (PV) projects”. Each of the two companies will put in $500 million over five years.

The jointly owned entity, to be called AES Solar, will seek to become a leading global developer, owner and operator of utility-scale solar installations that will be connected to the power grids that supply homes and businesses. These installations, ranging from fewer than two to more than 50 megawatts in size, will consist of land-based solar PV panels that capture sunlight and convert it into electricity, feeding the power grid directly.

The business will follow the traditional independent power producer and wind business growth models by initially focusing on developments and projects in those countries offering the most attractive tariffs. As the costs of both PV panels and installation come down, AES Solar will look to expand into other countries with appropriate market incentives, with the goal of “grid parity” – being competitive with conventional fuels.