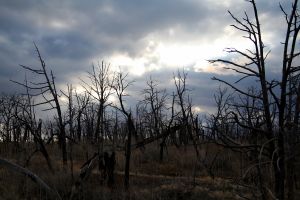 After more than 20 years research, boffins in Michigan have found moderate increases in temperature and nitrogen from atmospheric pollution actually improve forest productivity.

Researchers found trees grow faster at higher temperatures and store more carbon at greater concentrations of nitrogen, which is a constituent of acid rain, providing there is sufficient moisture.

“It may well be that increasing temperature and nitrogen deposition are good things up to a point.”

The rise in temperature is extending the growing season. So far Burton and his colleagues have measured 10 to 11 day longer growing seasons.

“Our growing season isn’t that long in the first place, so 10 or 11 days is significant.”

The research began as an acid rain study in 1987 has grown into one of the longest continous research studies supported by the National Science Foundation. Its latest grant of $151,628 will fund the research through 2012.

The research will now attempt to discover if the increased annual growth of the forests is offset by an increase in tree mortality and whether the woody debris on the forest floor will decompose more slowly as nitrogen levels are increased.