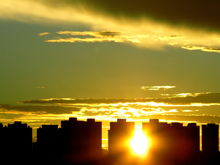 It’s all go over in Abu Dhabi. Not content with building the world’s most sustainable city, the gulf state is loading up on eco-initiatives like it was going out of fashion. Which it clearly isn’t. But that’s not stopping Abu Dhabi, oh no.

First up, a $15 billion fund – Greenbang will say it again, $15 billion – to work on environmentally-friendly energy and a power plant that will make the moon look small in comparisn. According to Reuters

Abu Dhabi Future Energy Co. plans to build what may become the world’s largest project to capture carbon dioxide and use it to boost oil and gas production. The state-owned company has chosen eight sites to inject about 15 million tons of carbon dioxide a year, a quarter of the emissions from Abu Dhabi […] “We hope to get approval during the first half of 2008,” said Sam Nader, director of carbon management for the company, which is known as Masdar, in a Jan. 17 telephone interview from Abu Dhabi. “If the project is agreed this year, our first site will be ready by 2013.”