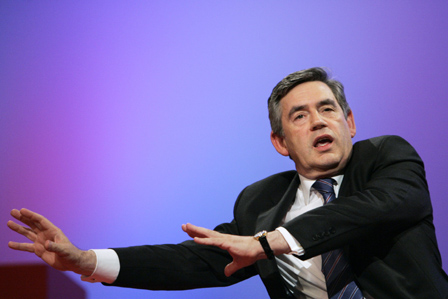 As if he didn’t already have enough on his plate with the 10p tax rate and John Prescott and Cherie Blair putting in the boot, Gordon Blair may soon have another little problem to deal with.

As the Telegraph reports, a plan to build a shiny new eco-town in Leicestershire, may soon lumber the Labour Party with new charges of cronyism and sleaze.
The local council doesn’t want the new town, which could house around 15,000 people, and even though they’ve turned it down already, it still on the list of the Government’s preferred 15 sites.

Objectors suggest that Labour could view the application kindly because it is proposed by the Co-operative Group which a) owns the land, b) sponsors lots of Labour MPs, and c) provides the Party with its £13.5m overdraft via the Co-operative Bank.

Here’s what the Telegraph reported:

Kevin Feltham, the chairman of Campaign Against the Stoughton Co-op Eco-Town, has said that the Co-operative Group has had previous applications to build on its land turned down.

“How many people realise that the Co-op Group is a major donor to the Labour Party? It really is at this stage that you think of it as sleaze. That’s all that one can think, because it stinks,” said Mr Feltham. It is of great concern that the current East Midlands minister, Phil Hope, is one of the MPs funded by the Co-op Party.”

1 thought on “A bit too co-operative, Gordon”