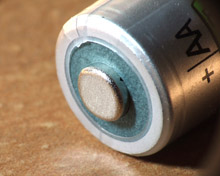 Green tech company M2E Power has got itself $8m in VC funding to further develop batteries that are charged by human movement, so News.com tells us:

“Its initial target is to create a D-size battery for the military and then create batteries for consumer electronics. Later, it plans to make larger batteries for renewable energy sources like wave power and wind turbines.
Soldiers rely increasingly on D and AA-size batteries to power scopes, radios, and other mobile electronics. Batteries alone can be an additional 10- to 30-pound burden, and discarded batteries leave a trace of a mission’s movements.”

After dwelling momentarily on Action Man type scenarios – “Fire in the hole!” – Greenbang is reminded of all the very sensible applications of this type of tech and looks forward to running for the bus and charging up an iPod at the same time.