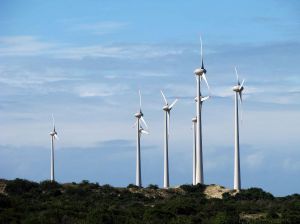 Hungary is putting a stop to any new wind turbines until it finds ways to store excess energy. The country’s Energy Office has decided this because wind generator performance varies depending on the wind and it cannot be stored and other energy producers have to cut back output.

A report by All Hungary News, said:

“The total performance of Hungary’s 63 windmills is 112.075 megawatts, less than one per cent of the country’s electricity consumption, which is still more than in most neighboring countries.”

If excess energy is generated by windmills then production from another power plant, such as the Paks nuclear plant, has to be cut back, according to the Hungarian Energy Office.

The full story is here or, if you want it in Hungarian, here.