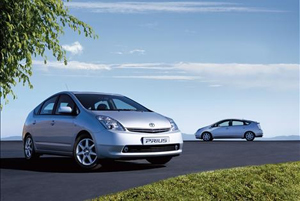 Over the weekend Reuters reported:

Toyota plans to install solar panels on some Prius hybrids in its next remodelling, responding to growing demand for “green” cars amid record-high oil prices, a source briefed on the matter said on Monday. The panels, supplied by Kyocera, would be able to power part of the air-conditioning on high-end versions of the gasoline-electric Prius, the source said.

“It’s more of a symbolic gesture,” said the source, who asked not to be identified. “It’s very difficult to power much more than that with solar energy.”

Toyota is due to launch the third-generation Prius next year.