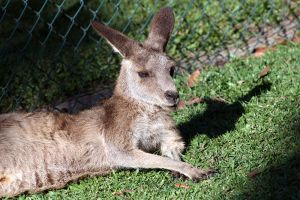 Greenbang’s got a soft spot for Australia. In addition to the country’s animals having the world’s greatest level of overkill its environmental credentials are also on the up.

According to the Aussie newspaper The Age Canberra yesterday outlined a plan for a carbon emissions trading scheme.  This will be launched in 2010.  Penny Wong, the Aussie climate change minister has said the government “has spoken loudly and carried a small stick.

It’s not perfect and does protect its heavily polluting industries that export oversees, giving them free credits for up to 90 per cent of their emissions but it’s a start.

As The Age put it:

This is at odds with the advice of the Government’s adviser on climate change, Professor Ross Garnaut, and it is at odds with good sense, and with Senator Wong’s statement that “we cannot continue to pour carbon pollution into the atmosphere as if there is no cost”. Labor says the cut in fuel excise is to allow people time to adjust, but three years seems a luxurious amount of time for people to think about it, and does nothing to move people onto public transport. And the Government is saying it will review its position only in 2013. This is a get-out clause depending on political circumstances.

Unfortunately there is not yet a carbon cap, but this is believed to be due in December.  The other disappointment for Greenbang is the scheme is to be self-regulated, not the best really, especially as Australia is one of the worst per capita polluters on the planet.