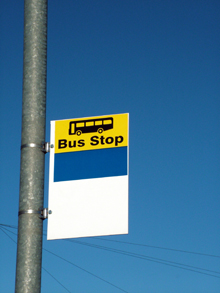 The buses of Greenbang’s youth were filled with crafty cigarette smoke, superannuated chewing gum and words etched into the windows that would make a sailor blush. For the little nippers of tomorrow, it will be all that and more: gum, smoke, obscenities and a hydrogen fuel cell.

Cal-start, a US transport tech firm, has won five contracts from the Federal Transit Administration, to get hydrogen-powered buses on the roads – it’s a $24 million project, split half each between Cal-start and the Administration.

Here’s the skinny on the fivesome:

* SunLine Transit Agency’s American Fuel Cell Bus – The focus of this direct path project, based at SunLine Transit Agency, internationally known for its hydrogen leadership, is to develop a purpose-built, next generation fuel cell bus. The bus features an upgraded 120-kilowatt fuel cell system from UTC, an advanced lithium-ion energy storage system, an advanced electric motive drive system from ISE Corp. that is lighter weight and lower cost, and an advanced New Flyer bus design using composite materials and modern electronics for weight reduction. SunLine will operate the bus in the nine cities of the Coachella Valley in California.

* AC Transit “HyRoad” – Based on considerable experience operating three advanced designed buses incorporating UTC Power fuel cell systems, AC Transit in the San Francisco Bay Area, a national leader in fuel cell bus design and operations, will push the limits of existing technology in this direct-path project. They will accelerate testing and identification of the weakest areas of fuel cell and hybrid systems, root cause analysis, fuel cell technology development, and component upgrades with more reliable and durable systems. Data collected from benchmarking current systems will lead to fuel cell and component upgrades roughly one year into the project.