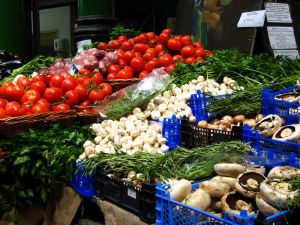 It started already last year, but 2010 is shaping up to be the year in which the issue of food security takes on a greater sense of urgency. Why? Because policy-makers have connected the dots about where current trends are taking us, and it’s scaring them silly.

Oh, and of course there’s population growth to consider too: by 2050, the world is expected to hold some 9 billion people, compared to 6.8 billion today.

Add all these things together, and it’s no wonder the people in charge are getting beyond nervous about food security.

So what’s the answer? (You can offer your own suggestions here.) In the UK, which just released its Food 2030 strategy, officials outline a wide range of solutions ranging from encouraging people to eat more healthfully and waste less food to investing more in agricultural research, including the potential for and safety of genetically modified foods (more on that to come in a future post). While there’s no doubt a great many things need to change to ensure our future food security, it’s less certain at the moment where the biggest bang for the buck will lie.

Hilary Benn, the UK’s Secretary of State for Environment, Food and Rural Affairs, says that, for him, his view of food security changed dramatically in 2008, when a combination of drought, poor harvests and record-high oil prices led to skyrocketing food costs and even riots in parts of the world.

“Right across the globe, the future we started to glimpse two years ago is now well and truly upon us,” he said during a speech at the Oxford Farming Conference this week. “Now it’s only in the last few decades that we have felt able to take food supply for granted, but the truth is now apparent.

“We cannot take it for granted any more.”

1 thought on “2010: The year to really start worrying about food security”