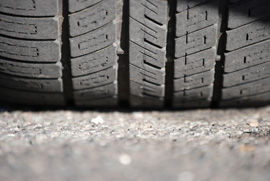 In Greenbang’s mind, recycling tyres means tying a bit of rope to one and making a swing or using a bit of voodoo and creating a humanoid made entirely of cast off tyres, à la Michelin Man. Luckily, others have got better ideas – like CBp Carbon Industries, which has just announced its snapped up worldwide ownership of Carbon Green Technology.

The company’s Vice-President of Technology, Mr. Fader, has filed a series of eight new patents in respect to the Company’s technology covering ancillary applications, such as use of CBp Green Carbon in road surfacing and roofing, in addition to its traditional application of tire and rubber manufacturing. Upon acceptance for registration these patents will provide the Company with 17 to 20 years of patent protection.

Meanwhil CBp has also got itself an extra $20 million in investment and will kick off by ramping up production in Europe and take the first steps to starting operations in North America and Asia-Pacific.