Greenbird sails down under for land speed record 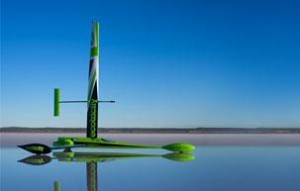 A couple of years ago Greenbang headed north on the M6 to visit the Lake District and saw countless pictures of Donald Campbell and his world record breaking boat, Bluebird.

Now, two Brits are going for a wind power land-speed record and have named the vehicle in Campbell’s honour – albeit reflecting the environmental credentials – Greenbird.

Showing that eco doesn’t mean slow, the record currently stands at 116mph. In fact, it can travel at speeds between four and six times the actual wind speed – don’t you just love physics.

Entrepreur Dale Vince and engineer Richard Jenkins are behind the project. Vince told the Beeb:

Albeit, it didn’t sound as cheesy when he actually said it on BBC News 24.

The team from Gloucester is already in Australia to test the vehicle and has told the BBC he is “eight out of 10 confident” of breaking the record. The team will have to wait for the weather to behave and the ground to dry up.

“The remaining water on the lake surface is causing quite serious concern. Although probably only 30 per cent of the lake surface is covered, it blows around depending on the wind direction. Last night we received the first signs of wind approaching with a cold shift and a southerly wind at about 15 mph, gusting 20.”

For those fancying plotting a course home, tacking up wind along the M4, the team behind Greenbird is working on a domestic wind-powered vehicle. Vince said:

“We’re going to have our prototype on the road in December.”