$10 million prize up for grabs in fuel-efficient race 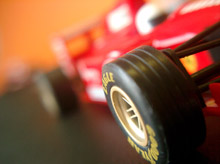 If you fancy getting your hands on $10 million – and let’s be honest here, who doesn’t – then Greenbang has found a better way than buying a ticket for this week’s lottery draw. No, it’s not buying two or three tickets for the lottery draw – it’s putting on your big science thinking cap and entering the X-Prize.

The Progressive Automotive X-Prize, in case you’re not familiar with competition, is a little bit does-what-it-says-on-the-tin: there’s a prize of $10 million in race of super fuel efficient cars.

The X-Prize Foundation announced the prize this week and explains it like this:

The goal of the Progressive Automotive X PRIZE is to inspire a new generation of viable, super fuel-efficient vehicles that offer more consumer choices. Ten million dollars in prizes will be awarded to the teams that win a stage race for clean, production-capable vehicles that exceed 100 MPGe.

The Progressive Automotive X PRIZE will place a major focus on affordability, safety, and the environment. It is about developing real, production-capable cars that consumers want to buy, not science projects or concept cars. This progress is needed because today’s oil consumption is unsustainable and because automotive emissions significantly contribute to global warming and climate change.

The race will kick off in 2009 and take in stages across the US, including New York, finishing some time in 2010.

Apparently, 60 teams are ready to take the challenge.