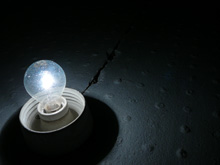 Hey, it’s January, and everyone’s a bit hard up. Before you start flogging your tat on eBay, you might want to dust down your spiffiest carbon cutting plans, because the
National Endowment for Science, Technology and the Arts or NESTA wants to give you – yes, you, sunshine – £1 million for the green contents of your grey matter.

Designed to address these barriers and develop home-grown ideas into carbon-cutting initiatives, the Big Green Challenge will encourage groups of people and not-for-profit organisations to think of new ways to reduce the carbon emissions of a community. Initial ideas must be submitted by the end of February, after which the top 100 will be whittled down to a short list of ten finalists, each of whom will receive £20,000, mentoring and support to put their ideas into practice. The group with the most imaginative and successful approach at the end of the competition will win the lion’s share of £1 million.

Eight out of ten people in the UK believe they’ve had an idea that would have a positive impact on everybody’s lives but, for the vast majority (72%), their moment of genius remains untapped over worries such as lack of funding or fear of failure.

Fear of failure or not, Greenbang is considering revealing her idea to have a positive impact on everybody’s life. It involves Jeremy Clarkson and a vat of acid…